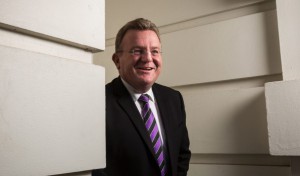 Minister for Small Business Bruce Billson says the government will not stand in the way of fintech that is lifting competition in the banking sector. Chris Hopkins

The Minister for Small Business Bruce Billson has backed a flurry of new online lenders targeting small and medium businesses to pressure the big banks to extend more credit to the often ignored sector.

Mr Billson gave a ringing endorsement of the fintech start-ups’ ability to stir the forces of banking competition, after the big banks were stung by criticism at the National Reform Summit last Wednesday.

Australian Chamber of Commerce and Industry chief Kate Carnell pointed to access to capital from the big banks as a hindrance holding small business back. Ms Carnell said big banks were typically requiring mortgage security to be pledged for small business loans or otherwise providing credit cards with high interest rates. Alternative funding sources such as those from crowdfunding and other online lenders must be supported by the government, she told the summit.

In an interview with Fairfax Media, he said: “One of the challenges that small businesses have faced is that the traditional big banks have tended to want coverage by a house or some other personal asset or guarantee to be prepared to make a facility available.

“But we are seeing the emergence through fintech and other models of new avenues for funding whether it be P2P [peer to peer], or crowd sourced equity funding. The new participants coming in offering different kinds of financing is very welcome. It has also shaken the tree of the big banks.

“We are making sure that nothing government is doing is standing in the way of the fintech revolution and new avenues of finance that may better meet the needs of smaller enterprises.”

Mr Billson’s parliamentary colleague Arthur Sinodinos attended the launch last Tuesday night of Stone & Chalk, a fintech hub in Sydney that will house 200 entrepreneurs by the end for the year. One of them is Spotcap, an online lender based in Berlin that has raised €18 million ($28 million) of equity and debt to date and is speaking to various counterparties in Australia about establishing finance facilities in Australian dollars to fund the growth of a local loan book.

Spotcap, which has been operating for two months in Australia, is offering a six-month credit line product up to $150,000 at interest rates starting at 0.5 per cent a month and averaging 1.5 to 2 per cent a month.

THE OXYGEN OF ENTERPRISE

The application process for the cash flow loans is 100 per cent online with each credit facility risk priced using a proprietary credit algorithm. Also unlike the big banks, the credit line is completely unsecured.

“Spotcap Australia has issued more than $1 million worth of credit to SMEs in its first 60 days of operation, which has exceeded our expectations and validates to us that there is significant demand for our credit line product from small businesses in Australia” said Lachlan Heussler, the company’s managing director in Australia.

Mr Billson said fintech start-ups are bringing a newly found culture of entrepreneurship to the economy that will be crucial for its future growth.

“The disrupters have shown there are other avenues to access finance, which is the oxygen of enterprise and if you starve it off that has a real impact on growth and economic opportunities,” he said.

Australia’s two million small to medium enterprises [SMEs] employ almost 70 per cent of the workforce – 4.5 million people – and account for over half of the output of the private sector, producing more than $340 billion of the nation’s economic output each year.

According to a submission to financial system inquiry by the Australian Centre for Financial Studies, banks are requiring more security on SME loans. “For younger business owners, increased reliance on collateral can present a significant barrier.”

It pointed to the rising cost of housing which meant many younger entrepreneurs didn’t have a property to pledge. It also called out the Basel banking regulations that require banks to hold more equity against business lending compared to home loans, which has resulted in the majority of big bank assets being mortgages.

Ms Carnell said it was understandable that banks wanted to minimise risk and maximise return on equity but “we went through the National Reform Summit where many comments were made about generating growth and productivity and innovation – which requires entrepreneurs growing and employing. That is all true, but none of it will happen if we have an environment where small business is not able to borrow. It seems like we skirt that issue a bit. The banks say there are no problems, of course they are willing to lend. Well, they are, but only when you can offer them a house.”

She called for light touch crowdfunding legislation to be introduced soon. She also encouraged alternative lenders to talk to SMEs about their offerings.

Mr Billson said he was disappointed that start-up entrepreneurs were not represented at the National Reform Summit last week. “I would have liked to see a greater focus on the entrepreneurial ecosystem in our economy,” he said.

“I wish there were more of the disrupters, the entrepreneurs, the enterprising men and women creating new businesses and new concepts of value for consumers, those using technology to disrupt the established economy to create the kind of enterprise culture we need for the future.

“That has got to be front and centre. We have to make sure those business ideas take hold and grow in Australia and aren’t enchanted to go to some other jurisdiction where the tax rate and policy settings might be more delightful than there are here.”

About Borrowing Key Statistics Apply for a loan

About Sponsors and Introducers